On the one hand, Brazil planting soybeans, on the other, the USA harvesting. Meanwhile, the dynamic global oilseed trade continues in full swing, given mainly the strength of Chinese demand. The Asian nation is present in both countries, reaffirming its need, its commitment to food security and its moment of replenishing stocks and plants.

Brazilian ports, although at a slightly slower pace compared to the first half of 2020, continue to ship the large volumes sold in advance and thus, the total already shipped by the country reaches 83.4 million tons, against 60 million in the same period last year, according to figures from Secex (Secretariat of Foreign Trade). Thus, Brazil needs just over 100 thousand tons to reach its record of 83.5 million soybeans exported.

"We have already shipped 78% of the harvested crop, compared to 63% in the same period last year. The year is running faster and the grain is gone and the bran is also ahead. The same happened with the oil. From now on , we should have a drop in the pace of shipments from the entire sector, mainly oil, which should ship little because the domestic market has been paying much better than the foreign market and thus, only previous business should continue to be shipped ", explains Vlamir Brandalizze, market consultant from Brandalizze Consulting.

The little soy still available in Brazil has been much disputed between exports and the domestic market, which has kept the values ​​at record levels - both in the interior and in the ports - and the premiums are very firm and valued. Also according to information from Brandalizze Consulting, the shortest positions have prizes - on the sellers' side - above US $ 2.30 per bushel above the values ​​practiced on the Chicago Stock Exchange.

Thus, as ARC Mercosul explains, "soybean exports are going through a transition moment to fill the shipping lines with corn. The scarcity of oilseeds in Brazilian territory has placed better offers in the industry, when compared to soybeans for export" . The amounts paid for available soybean reached R $ 150.00 per bag in some locations, reflecting this scenario.

In the same way, the anticipated sales of the 2020/21 harvest, which is now starting to be sown, also record pace and record numbers, since it is almost 60% committed to commercialization. From Mato Grosso alone, China has already purchased 13.53 million tons. "This value is close to that observed in the 2013/14 harvest and above all other seasons", explain the researchers from Imea (Instituto Mato-Grossense de Economia Agropecuária).

STRONG DEMAND IN THE USA

With these volumes and almost no oil availability, demand for months from China has been largely focused on the United States. And in this way, the total already committed by the country reaches 32.43 million tons, well above the little more than 11 million in the same period last year, according to the figures of the USDA (United States Department of Agriculture). 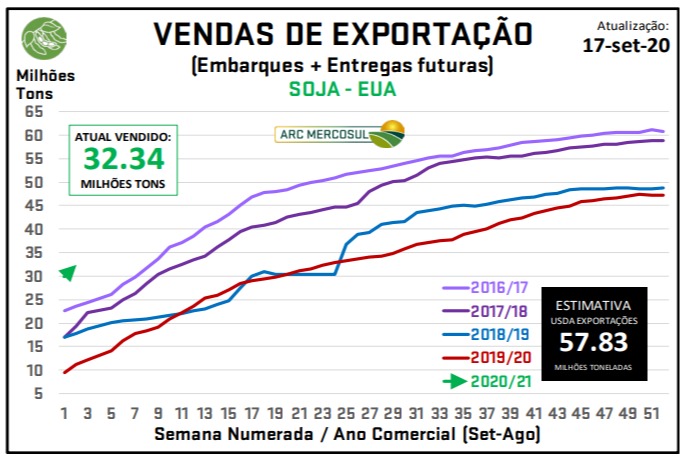 Also according to USDA data, US soybean shipments reach 3.567.160 million tons, up from just over 2.1 million last year, in the same range.