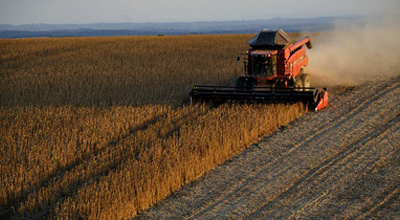 
With the soybean harvest of the 2020/21 delayed in relation to previous years, the record of Rio Grande do Sul cases of water stress in some crops and the advance of Asian rust disease, although a result of pests is considered small, reported Emater -On this Thursday.

"The reduction and even the absence of rain in some regions already shows the water stress of the crop in certain areas. The presence of pests is generally low; however, an Asian rust increases in the state's crops," said in a note the technicians of the government-related body.

Producers have not yet started harvesting soybeans, due to late planting marked by drought at the beginning of the season. In the same period of the last harvest, the work was at 5% and the historical average for this time of the year is at least 3%.

Most of the soybeans are in the grain filling stage (56%), an increase of 2 percentage points in the weekly comparison. Another 15% are in the maturation stage, down from 6% in the previous week.

In corn, the summer harvest has advanced to 55% of the areas, compared to 48% last week. The work exceeds both the same period of the previous year (54%) and the historical average (47%).

"In the areas to the north, the harvest is early and the productivity is lower. In regions where the crop is growing well, the yields are excellent," stated Emater. However, "many crops have cropping problems," she warned.