Posted by Mateus Ramos
May 12 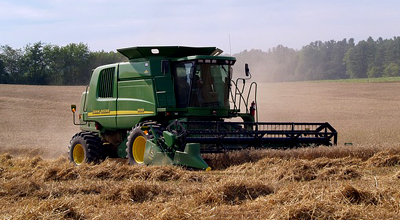 
National grain production is estimated at 271.696 million tons, with an increase of 5.7% or 14.7 million tons higher than that produced in 2019/20. The historic position is due to record soybean production and an estimated increase in total corn. The result is the 8th survey of the 2020/2021 harvest of grains, released on Wednesday (12), by the National Supply Company (Conab).

The first crop, with the exception of corn and rice, is at the end of the harvest. For the second crop, in the case of beans, flowering and grain filling stages predominate. As for the second crop corn, due to the delay in sowing, but with a significant percentage of vegetative development and flowering, the crop will depend on climatic conditions. In the case of winter crops, planting intensifies this month, but will depend on the volume of rainfall.

Even with a record volume, compared to last month's estimate, there is a reduction of 2.1 million tons. The reduction is mainly due to the delay in the soybean harvest and, as a consequence, the planting of a large part of the second crop corn area outside the ideal window, coupled with the low occurrence of rains. Therefore, there is already a reduction in the cereal's expected productivity.

Soy keeps its prominence, with a record production estimated at 135.4 million tons, 8.5% or 10.6 million tons higher than in the 2019/20 harvest. Brazil holds the title of the world's largest producer of legumes.

For the other grains, some increased production. Cotton has an estimated total of 6 million tonnes for the seed, corresponding to 2.4 million tonnes of plume. Rice, on the other hand, marks 11.6 million tons, an increase of 3.9% compared to the volume produced in the previous harvest. Of these, 10.7 million tons come from irrigated crops and 900 thousand tons from the rainfed system. The beans reduced 3.6% in the accumulated of the three harvests, totaling 3.1 million tons. And for peanuts, there is a 7.1% growth in production compared to that obtained in 2019/20, reaching around 597 thousand tons.

Feather cotton continues with a positive scenario in the international market. Exports accumulated from January to April 2021 increased 28% in relation to the same period of the previous year.

Regarding corn, even with shipments still slow, the demand in the external scenario points to a forecast of 35 million tons exported in the current harvest, a value practically equal to what was observed for the 2019/2020 harvest.

As for soybeans, Conab estimates the sale of 85.6 million tons outside the country, an increase of 3.3% in relation to the last year. Confirmed the forecast, it will be a record of the historical series. Finally, for rice, exports in April are at a 14% lower pace, when compared to the same month last year. In the accumulated until April, there is also a drop of 19% in the exported volume, due to the low availability of the product at the beginning of the year. The information comes from the Conab press office.