Posted by Rafael Moro
May 24 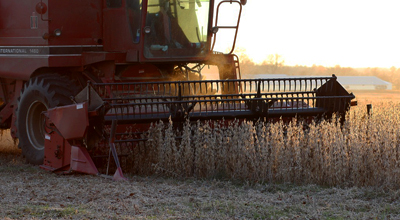 
China's demand for soy has attracted a lot of attention from the market right now. However, not because of its strength yet. It is known, but due to its recent absence, even if punctual, with new purchases both in the United States and in Brazil. This week, however, the Chinese returned to buy in the Brazilian market, according to information obtained by Agrinvest Commodities, something between 15 and 18 ships of the oilseed.

"And that ended up securing our premiums. The premiums for July, which reached 40 cents a dollar less per bushel than Chicago - the lowest level since 2018 - now come back and are here. less 16 cents Good news for us, but bad news for the United States, because our soybeans are much cheaper than theirs and compete directly with the American export program ", explains Eduado Vanin, Agrinvest market analyst.

In April, the numbers of Brazilian soy imports by China have already surprised by the high volumes that reached the country of the product in Brazil. There were 5.08 million tons, against just over 315 thousand tons in March. And although the total for the past month is less than the same as in 2020, the outlook remains positive.

After all, as Vanin explains, Brazilian soybeans are now the cheapest in the world for the Chinese and this is a picture that should extend, at least, until the interval from August to September when, little by little, buyers begin to to turn to the new offer that arrives from the 2021/22 harvest in the United States.

Also according to information from Reuters International, the processors increased their purchases, anticipating a greater demand for animal feed in the coming months in the face of a recovery of the pig farming that continues to be sought by Chinese producers.

At the peak of the resumption, new outbreaks of African swine fever were identified, in addition to other zoonoses, and hampered movement. At the other end, the prices of pork and pork were bitterly aggressive, further compromising the situation.

Thus, the crushing margins in China have also been going through a very difficult moment in view of the high prices of soybeans, containing demand, even if on time. Specifically because, as the numbers show, soy imports by the Asian nation in April, accounting for all origins, totaled 7.45 million tons, 11% more than there was one year ago.

Recently, the Ministry of Agriculture and Rural Affairs of China determined that animal nutrition experts work in formulas with the lowest use of soybean meal, which is already the case. has been confirmed in some companies.

According to a report reported by the international portal Global Times, New Hope Liuhe, the largest Chinese animal feed industry, is already using only 10% bran in its products since the end of April, compared to 13.2% in 2019 and 12.5% ​​in 2020.

"We have been adopting other types of bran and proteins to supply and guarantee the nutritional needs of pigs and chickens," the company told the Global Times, ensuring that it already has a healthy diet. it had been working on the change even before the recent changes in the global oilseed trade.

The objective of the Ministry of Agriculture is to reduce China's dependence on the use of soybean meal and, consequently, on imports, which are expected to break a new record this season, which may exceed 100 million tons.

However, experts affirm and recognize that this is a movement that would only consolidate and would, in fact, bring less dependence in the long run.

Yes. The projection is that the area planted with soy in China will be approximately 5.4% in this 2021/22 harvest and reach just over 9.3 million hectares, according to projections of the local Ministry of Agriculture. The setback would be given to give more space to corn, which should see its area grow more than 3% in this new season.