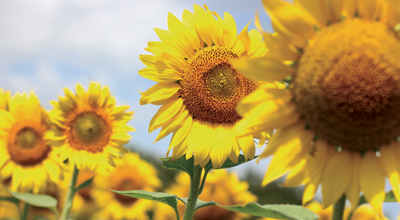 
The use of sunflower as an insect trap plant in tomato crops can reduce initial applications for the control of caterpillars and defoliating beetles by up to 30%. This is because the high number of insects that concentrate on sunflower inflorescences and leaves allows for a reduction in these pests in the main crop, requiring less chemical intervention in the crop. Since 2004, the Epagri Experimental Station in Caçador (EECD) recommends this technique to be added to others already used in Integrated Pest Management (MIP) aiming at a more sustainable cultivation.

The researcher from ECD, Janaína Pereira dos Santos, explains that the use of sunflower as a trap plant is based on the principle that the wavelengths emitted by yellow surfaces attract different species of insects. “The yellow color provokes the insect's instinct to search for food, as there is a strong relationship between this color and the presence of pollen grains in the center of the flowers, where the nectar is located. In this way, sunflower can be used to monitor and control insect pests in different types of crops, whose main pests are attracted by the yellow color”, she says.

Several producers in the Alto Vale do Rio do Peixe region who cultivate tomatoes based on the Integrated Tomato Production System (Sispit) use sunflower in the crop's borders. Farmers Valmir and Fabiano Susin, from Caçador, joined Sispit in 2007 and strictly follow Epagri's recommendations. “The sunflower is excellent for attracting the green kitty. Its use allowed the reduction of up to five applications in the tomato crop”, says Valmir, who cultivates 6,000 fruit trees on half a hectare of the property, maintained in partnership with his brother.

How to do it in practice

Sunflower is planted only on the borders of the main crop, as the objective is for it to form a physical barrier for insects, which will feed on the leaves and inflorescences and will not migrate into the interior of the crop. It attracts several species of “kitties” from the genera Diabrotica, Paranapiacaba and Microtheca (pest beetles), defoliating beetles of the species Astylus variegatus, whitefly, mites, caterpillars, as well as those of the genera Spodoptera and Helicoverpa, which are important tomato pests. In addition, it also attracts various natural enemies, such as parasitoid wasps, predators (ladybugs and bedbugs) and pollinating insects (brown bees and wasps).

Janaína explains that the distance between sunflower plants will depend on the type of crop. “In the tomato crop, sunflower seedlings are planted around the crop border at a distance of one meter between double rows and 2.4 meters between the main rows. In other cultures, you can plant the closest sunflower seedlings, up to one meter apart”, she says.

According to the researcher, the ideal is to transplant the sunflower seedlings a few days after planting the main crop. She points out that the vegetative cycle of sunflower is shorter than that of tomato, therefore, in order to have inflorescences throughout the vegetative cycle of tomato, producers must cultivate sunflower seedlings and transplant them in the field two to three times until the completion of the tomato harvest.

If the producer wants to cultivate sunflower to obtain the other potentialities of the crop, such as the commercialization of grains, the extraction of oil or even for feeding animals, the planting can be done in consortium with other cultures. “An alternative is to plant a row of sunflowers every two or three rows of the main crop”, recommends Janaína.

Sunflower can be used in various crops on the crop's borders in order to attract pest insects and natural enemies. As an example, Janaína cites soy, beans, peanuts, corn and crucifers (cabbage, broccoli, cauliflower, etc.), as they are usually attacked by mites, whitefly, miner flies, defoliating beetles of the Astylus species variegatus, “vaquinhas” of the genera Diabrotica, Paranapiacaba and Microtheca and by mede-palmo caterpillars, as well as those of the genera Spodoptera and Helicoverpa

The researcher emphasizes that the use of sunflower is just an ally in monitoring and controlling pests in the main crop and warns against high pest infestations. “In these cases, sunflower alone will not be enough to control these populations. Thus, control must be carried out in the main crop using other strategies that involve chemical or biological control, for example”, she says.

Janaina does not recommend the use of sunflower as a trap plant in greenhouse crops, as the effect may be the opposite of what is desired, since the closed environment causes pests to remain and multiply inside the greenhouse. “Furthermore, the temperature and humidity conditions in this type of location can favor the development of various species of pests, such as whitefly and mites”, warns the researcher.

The control of insect pests exclusively with pesticides is a commonly used practice in commercial agricultural crops. According to Janaína, in many cases these applications are made without technical criteria, which can increase production costs, the risks of environmental poisoning and the presence of residues in food. “Lately, the environmental awareness of consumers and farmers has favored the use of more sustainable techniques for pest control”, she says.

Thus, alternative control methods that are less aggressive to beneficial fauna and the environment must be adopted, which makes it essential to use strategies based on Integrated Pest Management (IPM). In this context, sunflower is used as a trap plant.