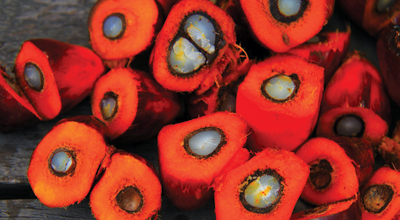 A Ghanaian association has launched an app to safeguard against a potentially carcinogenic red palm oil dye, Modern Ghana reported on 22 July.

The Artisanal Palm Oil Millers and Outgrowers Association of Ghana developed the app to enable consumers to trace the source of the palm oil and producers, Modern Ghana wrote.

Although banned as a food pigment by the International Agency for Research on Cancer (IARC) due to its carcinogenicity and mutagenicity, the red palm oil dye Sudan IV is used in Ghana to enhance the colour of palm oil, according to the report.

The Artisanal Palm Oil app would perform two functions, Paul Amaning president of the association, was quoted as saying.

Firstly, the app would allow customers to order palm oil and have it delivered directly to their homes and, secondly, a QR code would help verify the palm oil’s source and prevent consumption of any oil containing Sudan IV, he said.

Derived from the fruit of the African oil palm tree, red palm oil has a red/orangey colour and is used extensively for cooking in Africa due to its distinctive taste and colour, according to Eat Well Abi.

Red palm oil used for cooking is still mostly produced at artisanal levels, with the palm fruits being steamed to release the oil, then pressed to extract it, according to Eat Well Abi. The resulting red palm oil was not bleached or refined.

The more popular palm oil was refined and processed into a clear and odourless oil which was used in a wide range of products, from soaps, creams and conditioners to biscuits, ice cream and ready meals, the Eat Well Abi wrote.

Ghana’s palm oil industry is currently dominated by small-scale producers who are responsible for the production of about 60% of the country’s 120,000 tonnes/year production, according to Modern Ghana.