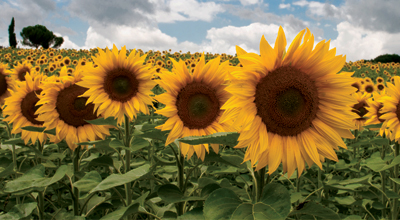 Sunflower production in the Black Sea region could rise by 6M tonnes due to improved weather conditions, AgriCensus reported analysts as saying on 17 August.

The forecast rise, mostly from the big producing nations, would represent a bounce-back from last year’s weather-related losses, according to the report.

In Ukraine, analysts expected the current season’s sunflower harvest to increase to between 16.5M-17.5M tonnes due to a rise in planted area and an unexpected yield improvement, the report said.

“The weather this year is favourable for sunflower,” an agronomist in the Odessa region told AgriCensus.

For Russia, analysts predicted a sunflower harvest in the range of 15.2M-16.7M tonnes, although the outlook was harder to predict as the country was again being hit by hot, dry conditions, according to the report.

The minimum threshold of the estimate was based on any decrease in yields due to dry weather, while the upper end of the scale was due to an increase in cultivated areas of 13% to 9.64M ha, according to Russian statistical agency Rosstat.

In a number of regions of Russia, dry and hot weather persisted, while the rains that took place in some southern and central regions had not significantly affected the condition of sunflowers, the report said.

“The big question is whether Russian farmers will be able to remove all the sunflower before the first snow, given the sharp increase in area and late planting. According to my estimates, up to 600,000ha will not be harvested on time, resulting in a reduced harvest,” Sergiy Repetskiy, managing partner at brokerage Sunstone Brokers SA told AgriCensus.

An increase in the sunflower crop in the Black Sea region was also expected in Bulgaria and Romania, which, according to analysts, would collectively harvest a total of 5.3M tonnes, 30% more than last year.

According to forecasts by the United States Department of Agriculture (USDA), Turkey was expected to have one of its biggest sunflower harvests of the past four years, amounting to 1.8M tonnes, which was 17% higher than last year.