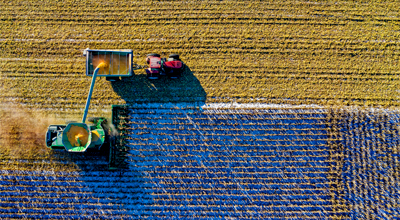 
The agribusiness balance of trade registered a record value in August, driven mainly by the rise in international prices of commodities exported by Brazil. The exported value was US$ 10.90 billion, a figure 26.7% higher than the US$ 8.60 billion exported in the same month of 2020.

In 2013 alone, Brazilian agribusiness exports reached the same level of US$ 10 billion for the months of August.

Imports of agribusiness products rose from US$912.47 million in August 2020 to US$1.25 billion in August 2021 (+37.2%). The values ​​were influenced by the rise in international prices, as in the case of wheat and palm oil, with an increase in the average imported price of 23.1% and 67.6%, respectively. As a result, the balance of trade in agribusiness reached US$ 9.64 billion.

The soy complex (in grains, bran and oil), the main export sector of Brazilian agribusiness, reached US$ 4.02 billion in foreign exchange, which meant an increase of 53.6% in relation to the US$ 2.62 billion exported in August 2020.

The increase in the exported volume of soybeans in grain and the strong rise in international prices resulted in US$ 3.14 billion in exports in August 2021 (+52.5%).

Oilseed supply was a record in the 2020/2021 Brazilian crop, with 136 million tons of soybeans, an increase of 8.9%, favoring export capacity, according to the analysis of the Secretariat of Commerce and International Relations (SCRI) of the Ministry of Agriculture, Livestock and Supply (Map).

The forest products sector was one of the sectors that surpassed the figure of US$ 1 billion in exports in the month of August. The exported value reached US$ 1.25 billion (+40.5%), due to the strong increase in average export prices (+31.2%).

Foreign sales of meat totaled US$ 2.09 billion (+40.5%), unprecedented for the month of August since the beginning of the historical series in 1997. Average export prices for meat increased (+34.8% ), as well as an expansion in the volume of foreign sales (+4.2%). The result is related to the supply, demand and costs of world production, points out the SCRI study.

World beef production is expected to drop to 60.8 million tons (-1.1%), with reduced slaughter in Argentina, Australia and Brazil, which strongly pressures international prices.